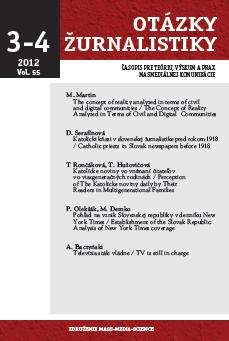 Summary/Abstract: The New York Times daily is one of the most-respected daily newspapers with very high circulation across the United States of America and with its huge influence around the world. What was its view of the dissolution of former Czechoslovakia and the birth of two new states – the Slovak Republic and the Czech Republic? This article after the content analysis shows that the New York Times (NYT) daily from time to time informed an American public on peaceful separation of the Czecho-Slovak federation and about all imporant facts and events that happened in Slovakia since 1st January 1992 to 31th December 1993. New York Times had published 78 articles in years 1992-1993 which match the word „Slovak Republic“ in its own research Internet engine, mainly in categories of World (45), Opinion (15), Business (7), and Washington (5). Other articles are under different categories, for example Art or Travel.