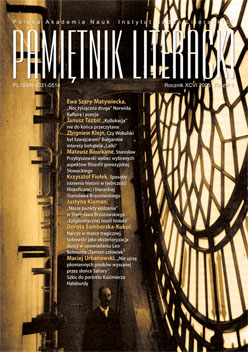 Summary/Abstract: Józef Korzeniowski’s (1797–1863) novels enjoyed an immense popularity in Poland in the mid 19th century. It also refers to his novel “Collocation”; numerous subsequent editions followed its first appearance in 1847. Readers found in the novel a picture of the gentry farming the land and living in a village divided among many owners. On the one hand, Korzeniowski did not conceal the gentry’s faults, which contradicted the view of the idealized gentry found in the romantic literature. On the other hand, he can be called a “Polish anti-Balzac”. Korzeniowski deeply sympathized with the inadequate and any man making a fortune was seen as a loathsome nouveau rich. Though the action of Collocation takes place in the Wołyń region under Russian rule, the novel is devoid of any allusions to national affairs. This point is characteristic of many Korzeniowski’s novels and because of that emigrant critics accused him of approving the consent with the Russian invader.