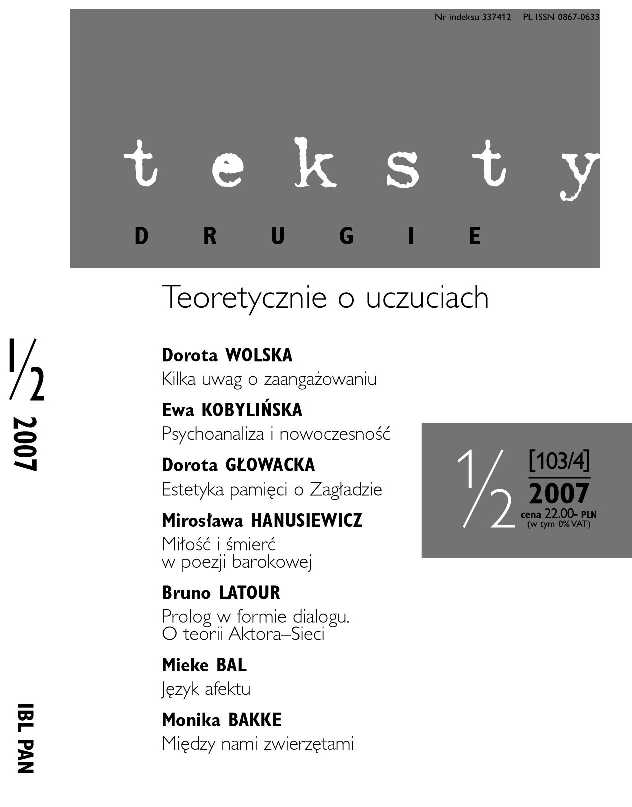 Summary/Abstract: The text is in the form of a dialogue between a professor representing the Actor-Network Theory and a doctor’s degree candidate whose tutor has suggested to him that he applied the approach in his research. A talk is, then, one between an expert (in a given area) and a layman. Such a structure enables the staging of going through a variety of misunderstandings arising around the Theory and some typical accusations charged against it. The first to tackle were the troubles with the name itself and the improper use of the term ‘theory’. Then came the question of understanding what a tool is; juxtaposing the frame (as a context) with a description; objectivity and empiricism and relativism at the same time; text approached as a social sciences laboratory. The notion of ‘actor’ made opposite to a marionette controlled by social forces, thus being an informer only, is discussed at more length. Along with those, accompanying issues appear of information as trans-formation, invisibility of actors and their criticality and reflexivity.

БЕЛЕЖКИ КЬМ АНТРОПОЛОГИЯТА НА РАЗУМА SOME NOTES TO THE ANTHROPOLOGY OF REASON 1994 На какво се дължи успехът на нововъведенията What Is the Success of Innovations Due To 1996 "ce este Iconoclash? sau există o lume dincolo de războiul imaginilor?" "What is the Iconoclash? Or is there an art beyond the image war?" 2003 Misliti posredovanja To Think Intermediations 2005 Czy wierzysz w rzeczywistość?, tłum. K. Abriszewski Do You Believe in Reality 2013
2023 © CEEOL. ALL Rights Reserved. Privacy Policy | Terms & Conditions of use
ICB - InterConsult Bulgaria core ver.2.0.1219