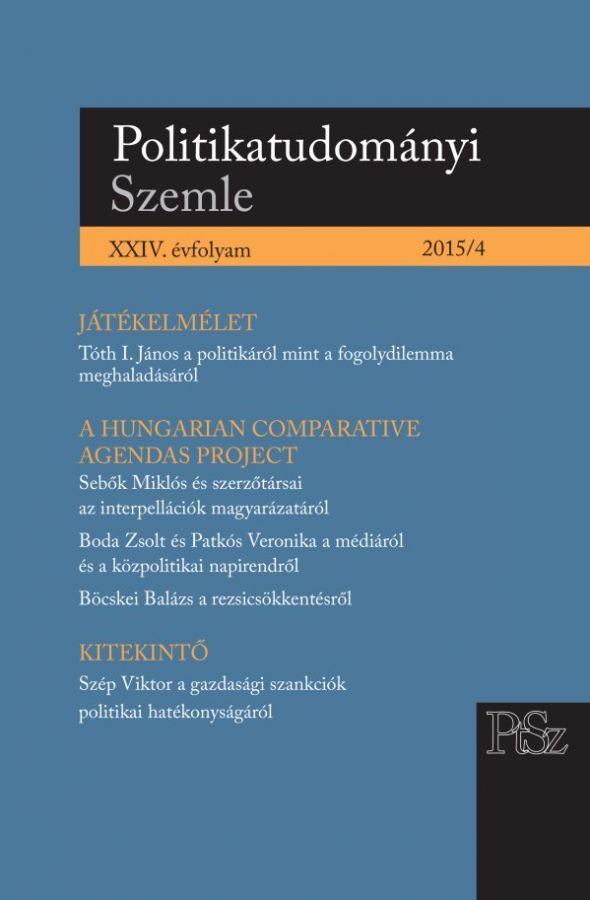 A „politikai kormányzás” a média és a közpolitikai napirendek tükrében, 2010 és 2014 között
“POLITICAL GOVERNANCE” AS REFLECTED BY THE MEDIA AND POLICY AGENDAS, 2010–2014

Summary/Abstract: A general assumption about the policy-making process in Hungary is that in the past four years it has been largely dominated by political initiatives originating from the government and the ruling party. That is, policy change has been primarily driven by political initiatives of the power centre, instead of being responsive to the concerns of the public. In our study, we are empirically testing the hypothesis about the politically driven policy change, using the media agenda and legislative agendas of the Hungarian Comparative Agendas Project. We identifi ed the important policy changes as those topics to which the media has provided a larger-than-average coverage on a yearly basis. Outstanding coverage has been usually linked to one policy issue, and in most of the cases, we found some kind of policy decision related to the issue. However, locating the policy decision or the fi rst interpellation related to the given issue we found that they usually preceded the media coverage – that is, instead of the media agenda pulling the policy agenda, the general logic is just the opposite: media is talking about the policy initiatives of the government. Only a few cases show the ‘textbook case’ of increased media coverage spurring political interest. This is explained by both the style of governance and the weak policy capacities of Hungary