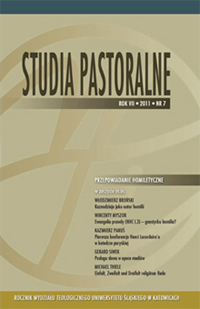 Summary/Abstract: John Paul is rightly considered to have been the pope, who contributed with his teaching to the reconciliation between the Catholic Church and Jews. His visits in the Roman Great Synagogue, in the Yad Vashem Institute of Martyrs and Heroes, as well as the prayer at the Western Wall in Jerusalem, earned their permanent place in the process of rapprochement of all Catholics and followers of Judaism. However, it must not be forgotten that, as it happens in any interreligious and ecumenical dialogue, so in the relations between the Catholic Church and Jews, sometimes certain controversies occurred. In the eighties of the XX century the causes of misunderstandings were the Vatican visits of Yasser Arafat, the Palestinian leader, and of Kurt Waldheim, the Austrian president, which brought the mutual relations to a halt for a certain period. Neither did the definitely anti-Semitic statements of Syrian political and religious leaders escape the attention of Jews during John Paul’s pilgrimage to Syria. Yet the pope’s kind, patient and dialogue-oriented attitude finally brought about the rapprochement between Syrians and Israelis. The reconciliation between the presidents of Syria and Israel, which took place at the funeral celebrations of John Paul II, was the most expressive token of that rapprochement.