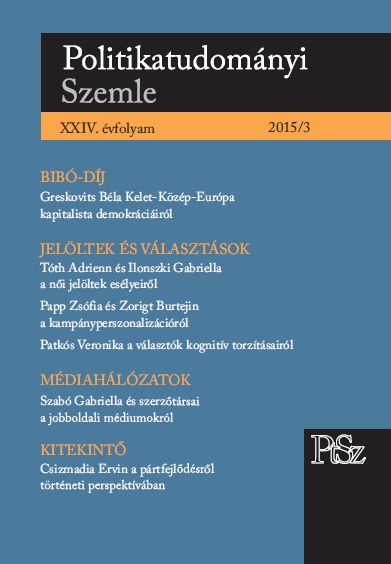 Summary/Abstract: The paper is an edited version of the lecture given at the Bibó-award ceremony. It differentiates among three types of Est Central European capitalist democracies: the neoliberal system of Estonia, Latvia and Lithuania, the embedded neoliberalism of the Czech Republic, Hungary, Poland and Slovakia, and the neocorporatist capitalism of Slovenia. By applying and further developing the theory of Karl Polanyi I consider the market economy, on one hand, and the institutions of the welfare state aiming at sustaining social cohesion, on the other, as the cornerstone institutions of the new capitalist models. These institutions are in inherent tensions with each other and these confl icts are supposed to be attenuated or coordinated by the political sphere, more precisely the governments – if they are capable to do so. The coordination might be in peril if the political sphere is not able to provide a responsible and responsive mode of governance. There is in fact a relationship that links the disequilibrium between responsibility and responsiveness to the two illnesses of democracy: the disinterest of citizens in politics and the conscious dismantling of democratic institutions. The new combinations of bad governance and ill democracies that emerged in the ECE region after the global economic crisis might undermine the prospects of the new capitalist systems.