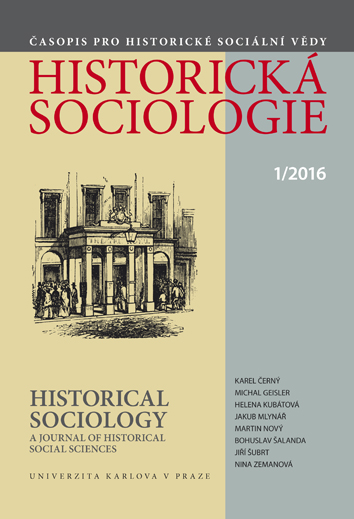 Summary/Abstract: This study explores the fundamental traits of Adorno’s conceptual understanding of modernity. In Czech sociology, there has not been a serious discussion of Adorno’s seminal oeuvre, this article aims to fill that gap. The aim is to reconstruct the very basis of Adorno’s sociological method: firstly, the essay turns its attention to the historically specific mode of subsumption of human action to the conceptual totality of class domination. In this process, an individual adopts a positive identity within which its suppressed, ontologically negative complement – its dynamic non-identity, persists. Secondly, the study deals with Adorno’s derivation of the concept of social essence. In this respect, he draws on Marx’s Capital, but Adorno’s critical reading introduces an important conceptual innovation: under the conditions of Keynesianism, Adorno challenges the validity of Marx’s theorization of law-like objectivity of value and replaces it with the concept of exchange as the universal model of social activity. However, the study argues that Adorno ’ s reconstruction of Marx’s critique of political economy has reified Keynesian management of the capitalist economy.

K rekonstrukci „kapitalismu“ u autorů otevřeného marxismu On the Reconstruction of ‘Capitalism’ in the Work of Open Marxists 2013 Nástin kritického konceptu třídy An Outline of the Critical Concept of Class 2014
2020 © CEEOL. ALL Rights Reserved. Privacy Policy | Terms & Conditions of use
ICB - InterConsult Bulgaria ver.1.5.0917