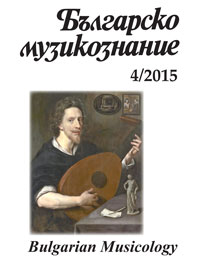 Summary/Abstract: Over the last decades, a notable revival of interest among performers and hence among researchers in the sacred compositions and the perennial oeuvre of remarkable Russian composer Pavel Grigorievich Tschesnokoff has been witnessed. Renowned Bulgarian bass singers such as Boris Christoff, Nicola Ghiuselev and young Orlin Anastasov have interpreted his pieces in this country. Both church and secular choirs, led by prominent Bulgarian conductors, include choral pieces by Tschesnokoff in their repertoires. This paper pre​sents the composer as a leading figure in the so-called New School in Russian Sacred Music of the turn of the twentieth century, considering the topical issue of the extent to which his work is known and performed in Bulgaria and Russia nowadays.