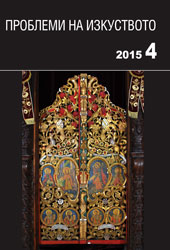 Summary/Abstract: Works by icon-painters of the Art Schools of Debar and Samokov are found in the nineteenth-century Bosnia and Herzegovina, Sandžak, Montenegro and the emerging Kingdom of Serbia. This fact stemmed from the Ottoman imperial context, in which the painters worked as well as from geographical reasons allowing for their movement and translation of icons. A specific cultural model of the Orthodox Christians developed within the Ottoman Empire uninfluenced by ethnic or national borders, but conforming to the millet system of the Ottoman Empire. The Orthodox Christians from across the Balkans and the empire shared the same views of their religious and cultural life, rendered in similar solutions to all aspects of the visual culture and to the design and decoration of the Orthodox churches. That allowed for icon-painters and builders to move across the entire Ottoman Balkan territory, which is evidenced by such examples as the iconostasis by the Ginovski brothers in Novi Pazar, the​ icon of St Stephen by Petar Debranec from the village of Tresonče and the iconostasis painted by the Dičić brothers in Štitkovo. Icon-painters from Debar and Samokov worked in the nineteenth-century Principality/Kingdom of Serbia. Despite the changes in the top clergy’s idea of church art, icon painters worked in frontier areas such as Negotinska Krajina. Some of them such as Teofan Isailović Bužarovski and Zachary Dimitrov settled in Serbia.