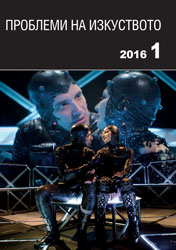 Summary/Abstract: The article outlines and comments on the dramaturgical style and theatrical aesthetics of one of the most topical, radical and prolific playwrights and directors in Germany. It highlights the grounds and the manner of problematizing and the critical use of the form of drama in his theatrical texts. The latter is defined as a keynote anti-dramatic theatre, ceaselessly questioning drama conventions and functioning beyond the principles of the objective-mimetic theatricality. The article dwells on the definition of the aesthetics of the dramaturgy and the stagings by René Pollesch (almost exclusively of his own works) such as ‘pop’ or ‘discursive theatre’. An important particularity of his theatrical texts lies in that they are subject to a specific scenic concept, reaching their final version in close cooperation with the actors, with a view to whom they have often been composed. At times their own names are used or fictionalised roles are assigned to them. They are unalterably acting as ‘speaking heads, extreme talking machines’, who, lingering over philosophical theses, theoretical articulations, are hysterically attempting to reflect on the conditions of their existence; the mechanism of building a subject in the context they are themati​sing, the theatrical situation they are producing. The assumption that René Pollesch’s theatre is a kind of a gesture of desperation at the complexity of the contemporary world and at the ignorance of coping with the problems faced by each individual, is treated in such a context. Using the dramaturgical analysis of René Pollesch’s Cappuccetto Rosso, the article explores the underlying idea of drama and of strategies of transforming the form of drama.