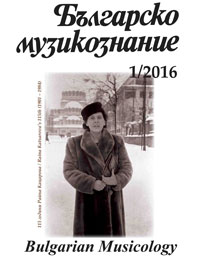 Summary/Abstract: Since September 2015, a permanent seminar has been conducted at the Institute of Art Studies by the Musical Culture and Information research group. They make every effort the seminar’s editions to be attended by as many active participants as possible. Various topics are proposed every time by different members of the research group, who then open the discussions with keynote papers. Bulgarian Musicology journal would publish some of the papers as well as statements and communications made during the seminar. The topic of the first session, Short forms in music: aesthetics, history, modern times, was introduced by Assoc. Prof. Dr Rossitsa Draganova, who made a statement on Short forms in music and the other arts. Asst. Prof. Dr Mihail Lukanov and Asst. Prof. Dr Diana Danova-Damianova joined in, delivering papers on Short forms in music and Bulgarian schlager of the 1930s and Short forms in music in the programmes of ppIANISSIMO International Festival of Contemporary Piano Music respectively. Nadia Sotirova, director of Pancho Vladigerov’s museum, Sofia and Svetlana Avdala, a full-time doctoral student, Department of Music, presented the realised project Microcosm, performance of 60 one- minute pieces. Assoc. Prof. Dr Lubomir Kavaldjiev, founder of the research group, Prof. Elisaveta Valchinova- Chendova, DSc and Prof. Dr Rumyana Karakostova joined the discussion. The second session held in October dealt with the so-called free forms in music and particularly, with the free forms in the sixteenth-century lute repertory. Assoc. Prof. Dr Yavor Genov delivered a keynote paper on the topic. He believes that these forms have later generated a number of vital trends in instrumental thinking. Colleagues invited especially to take part in the seminar, Prof. Yavor Konov, DSc from NBU and Assoc. Prof. Dr Ivanka Vlaeva from SWU, an associate member of Department of Music, joined the discussion. The third session held in November was devoted to the nineteenth- and the twentieth-century song forms in music and to research aspects and issues related to them. A keynote paper on the specifics of some forms of the twentieth-century popular music (strophic, verse/ chorus, 32-bar and blues forms) was delivered by Asst. Prof. Dr Mihail Lukanov. Talking and arguing about these untraditional and at the same time topical issues, never broached for now in a special or a long-term study by any of the members of the Musical Culture and Information research group, proved to be intriguing and fruitful. There was a general sense of innovativeness, of refreshment of notions, generating resources of new approaches. New areas for discussion were established and formulated for the forthcoming editions of the seminar.