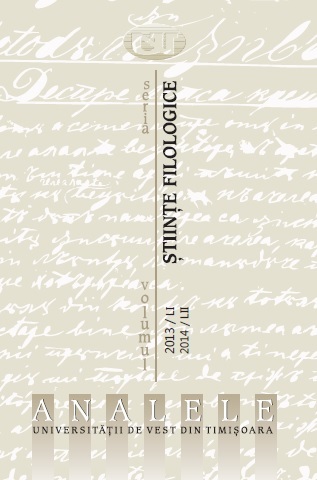 Summary/Abstract: In this study, we argue that antonymy is a universal linguistic and cognitive phenomenon that points to general or national pattern behaviours that are difficult to identify and clarify. To decipher these cultural and linguistic behaviours, we have focused on cognitivism, delimiting the “antonymic concept”. We have suggested interpreting antonymic conceptualization as a way of conceptual-discourse structuring. This was applied to the postmodern fiction text Nepoata lui Dali by Simona Constantinovici (2009). Thus, by analysing the antonymic concept viaţă-moarte (life-death) as a discourse macro-intention we show that narrative expansion and text construction are also done on a conceptual-antonymic basis, which shows the importance of antonymic cohesion in discourse structuring. Finally, based on the conceptual-literary plane provided by the antonymic contexts and the corpus of conceptual phrases excerpted from the novel, we have succeeded in isolating conceptual-auctorial metaphors concerning “viaţa” (life) and “moarte” (death) and conceptual-literary networks of “viaţă” (life) and “moarte” (death). Based on them, we supply a model of discourse configuration based on the antonymic concept in the novel analyzed.