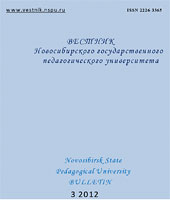 Summary/Abstract: The parameters of water-salt metabolism and kidney functions in young men of different constitutional types were studied. It has been found that plasma sodium concentration was significantly higher in boys of hypersthenic type, but plasma potassium level was higher in boys of asthenic type compare to other types. The background parameters of plasma and urine, characterized the hydro-and ion-excretory renal function as well the hormonal status, did not significantly differ between boys of different constitutional groups. After a 1 % water load boys of hypersthenic type had an elevated level of urine excretion at a reduced fluid reabsorption, whereas the level of sodium excretion was significantly lower, and the excretion of potassium was higher than in other types.