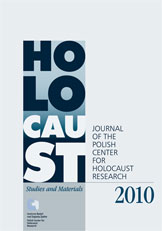 Summary/Abstract: The article deals with the ways of describing the issue of individual and organised help to the Jews in Polish historical discourse during 1945–2008. The author analyses press statements, academic articles, and popular articles and, finally, books published in Poland (including publications by historians from the Jewish Historical Institute in Warsaw) as well as émigré texts. The article also discusses the source basis used in the texts by Polish authors, their methods of analysis as well as the political conditions of the discourse concerning Polish-Jewish relations during the occupation, identifying the key time limits. Particular attention has been paid to the trends in historical writing in the immediate post-war period, in the mid-1960s (with the anti-Zionist campaign at the fore), in the mid-1980s, and, finally, during 2000–2006. The article discusses all the key publications regarding help to the Jews by: T. Berenstein and Adam Rutkowski, Szymon Datner, Władysław Bartoszewski, Kazimierz Iranek-Osmecki, Teresa Prekerowa, Jan T. Gross and the research and educational activity of the Main Commission to Investigate Nazi Crimes in Poland, the Society of Fighters for Freedom and Democracy (ZBOWiD) and the Institute of National Remembrance.