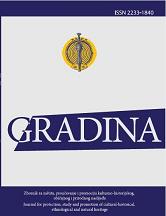 Summary/Abstract: The article deals with the continuity of human settlements and their importance in the area of Gradišće near Zenica from prehistory to the Middle Ages. The area was densely inhabited during prehistoric times as evidenced by the six hill fort settlements of which the earliest dates to the late Copper Age. The same trend continued in the period of Antiquity because in the vicinity larger Roman agglomerations and settlements existed and the Roman roads were passing. In the Middle Ages, Gradišće was also important medieval settlement what is illustrated by numerous monuments and sites with the archaeological remains from the period. The inscription of the Great judge Gradiša is the most representative monument of the period.