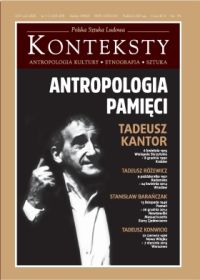 "Nie zagląda się bezkarnie przez okno". Późna twórczość malarska i teatralna Tadeusza Kantora
"One Does Not Look into the Window with Impunity". Late Paintings and Theatrical Spectacles by Tadeusz Kantor

Summary/Abstract: An analysis of a series of paintings by Tadeusz Kantor: One Does Not Look into the Window with Impunity, conducted in reference to his last theatrical works. Late paintings by Tadeusz Kantor from the second half of the 1980s constitute an art of borderline situations similarly as the last Cricot 2 Theatre spectacles. All the canvases contain an inscribed undecidability balancing on the border, a game played with presence - absence, perception – non-perception, reality - fiction, life - death, memory – projection, time - timelessness, historical necessity – individual freedom, and catastrophe - hope for salvation and redemption. The pulsating “between the two” is accompanied by the construction of imprisonment, discernible in almost all of Kantor’s late works. It became the key concept of the spectacle: Let the Artists Die (1985), in which Kantor compared the condition of creation to that of a prison. It is also present in an extremely tangible manner in his last production: Today is My Birthday(1991), balancing between reality and illusion.