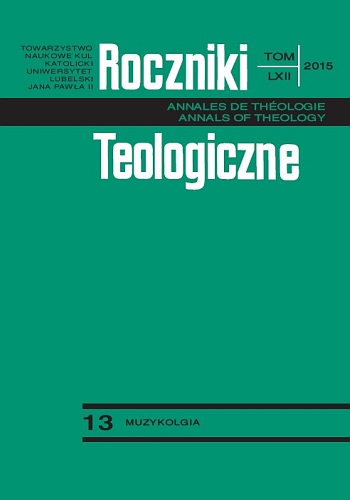 Summary/Abstract: The aesthetic of socialist realism, which was imposed on Polish composers after the conference in Łagów Lubuski (1949), has never been precisely defined. One of the recommended elements of creative activity—apart from intelligibility of musical language—was folk inspiration. Paradoxically, the way the folklore was seized could mean both the compromise with the ideological pressure and confirmation of the artist’s sovereignty (when the artist creatively continued national tradition). Polish composers chose this neutral source of inspiration willingly. Therefore, the turn of the 40s and 50s was the time of multitudinous folkloristic stylizations in Polish music. The purpose of this paper is to recapitulate the attitude of chosen Polish composers to folk music as the source of inspiration, as well as to a general socio-political situation during the Polish socialist realism. Resuming briefly the subject matter of folklore in the Polish socialist realism four categories might be distinguished: it could be a phase of evolution of musical language (in the works of W. Lutosławski, A. Panufnik and G. Bacewicz), a continuation of pre-war idea of popularization of national music (S. Wiechowicz or B. Woytowicz) or a sort of compromise and a factor which was able to withdraw the accusations of formalism, as in the case of Perkowski, Serocki and all the 49’Group. Finally, in its most barest form, folklore was just an instrument of propaganda, quickly and willingly forgotten after the arrival of new artistic trends in 1956.