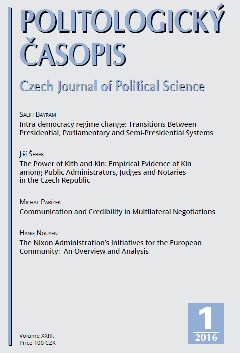 Summary/Abstract: This article examines transitions between presidential, parliamentary and semi-presidential systems in democracies. Using two major datasets, it identifies nine such transitions in eight different countries: Brazil 1961, France 1962, Sri Lanka 1977, Slovakia 1999, Moldova 2000, Turkey 2007, Kenya 2008, Kenya 2010, and the Czech Republic 2012. Findings from a close examination of these cases include the following: most transitions involve the semi-presidential regime type; serious crises precede the transitions in nearly all the cases and change is often used as a means of solving these crises; electoral volatility and turnover in government precede most transitions; change serves different functions in different political contexts, ranging from facilitating acceptance of anti-establishment executives to implementing power-sharing deals; and once achieved, regime change becomes an almost permanent fixture on the political agenda, with debates escalating rather than dying down.