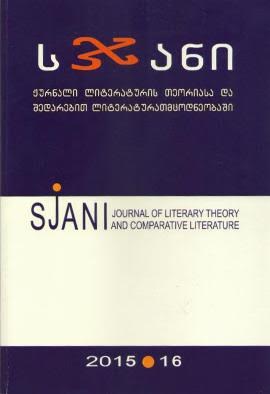 Summary/Abstract: Georgian translations of Byzantine Hymnography deserve attention in a study of creativity of the well-known medieval authors. Among them is the legacy of the ninth century outstanding ecclesiastic figure and hymnoghrapher - Theodore Studites. The name of Theodore Studites is associated with final victory over the Iconoclastic controversy that was the goal of his life. He composed Typikon of the Studios Monastery.A great number of homilies and epistles are connected with the name of this Church Father. He made a significant contribution to the development of hymnography too.Theodore Studites is the most outstanding representative of the Byzantine hymnography of Constantinopolitan period. His life and activities created a whole epoch, new stage in the history of Byzantine hymnography. Subsequent hymnographers were actually his followers.The appearance of Theodore Studites in Georgian hymnography is associated with the so-called “New Tropologion” (“New Iadgari”). Such kind of collection was created in Byzantium as a result of conducting a reform in hymnography by John Damascene. Hymnographic repertoire entering this collection was already created by new metres – Byzantineverse based on rhythmical and melodic correspondence of the hymns to the model stanzas (the heirmoi). The texts are accompanied by rhythmic punctuation and neumes. This collection must have been translated into Georgian in the 9th century. The introduction of Theodore Studites’ “three-ode” cycle into Georgian hymnography is connected with “New Tropologion”, namely. After this we find the name of Theodore Studites in the first Georgian “Triodion” that was separated as an independent collection in the first half of the 10th century. A vast repertoire of Theodore Studites’ hymns written for Lent – 35“three-odes”, small-sized hymns and the “Kanon on the Last Judgement” appear to have been entered in Georgian manuscripts.Theodore Studites’ hymns are included in the collections compiled by the great authorities of Georgian Church – George Athonite and Ephrem Mtsire. These hymns are still used in liturgical practice today.The “Kanon on the Last Judgement” by Theodore Studites has been specially studied in this paper. This hymn was translated into Georgian three times by Eqvtime and Giorgi Athonites as well as by Arsen Iqaltoeli. This Kanon seems to have been frequently referred to by Georgian hymnographers when writing on this theme.As it turns out this hymn of Theodore Studites was one of the sources for the masterpiece of Georgian hymnography – “The Hymn of Repentance” written by David Aghmashenebeli. Both Theodore Studites and David Aghmashenebeli’s hymns deal with a universal judgment and not individual. Both authors are speaking not only about personal but universal sins. A deep sense of repentance and one’s own worthlessness are common to both of them. The Kanon written by Theodore Studites strikes David Aghmashenebeli’s hymn not only by general conception and the tension of repentance motive but also by similar artistic images and phraseology.The third translation of this hymn of Theodore Studites into Georgian language was done by Arsen Iqaltoeli, from David Aghmashenebeli’s immediate surroundings. It was heto whom the King ordered translation of Andrew of Crete’s “Great Kanon of Repentance”for the third time. It seems he was also familiar with Arsen Iqaltoeli’s translation of the mentioned Kanon written by Theodore Studites.