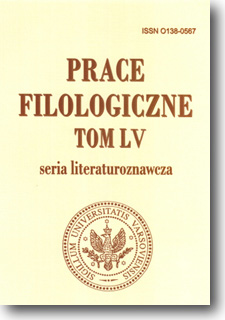 Summary/Abstract: This paper presets the flourishing of Borderlands literature and accompanying literary studies since the 1980’s. The first part is devoted to the discussion of terminology, which evolved around the term “kresy” (the Borderlands), triggered by the final disappearance of the referent following the World War II, and by various ensuing interpretations of this traumatic fact. Therefore, the notion of “kresy” enters into some semantic relation to notions such as: “borderlands”, “my native land”, “myth”. The second part is focused on methodological concerns, presenting the structuralist-semiotic, thematic, deconstructionist, feminist, postcolonialist, and comparative approaches and tendencies in the studies of Borderlands literature. These observations lead to the final conclusion acknowledging that the theme of “kresy”, central to the evolution of Polish historical awareness, entangles those interdisciplinary, multicultural directions of studies, which interpret Polish history and culture in the perspective of philosophy and the aesthetics of dialogue and its central European identity.