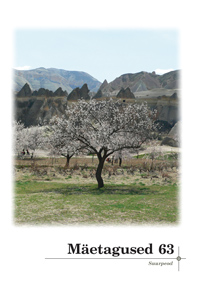 Summary/Abstract: In Estonia the notion of Estonian song festivals has become synonymous with the name of beloved composer and conductor Gustav Ernesaks (1908–2003). The reasons for this are both unplanned and purposeful, both simple and complex.In marked contrast, the song festivals are not even peripherally associated with the traditions and conductors outside of Soviet-occupied Estonia, who were in many ways the custodians of qualified and non-Sovietised Estonian choir music. Prominent figures such as Juhan Aavik, Eduard Tubin, and Tuudur Vettik, followed by their students Harri Kiisk in Sweden and Roman Toi in Canada, promoted the democratic and freedom-oriented Estonian Song Festival tradition in Sweden, Germany, Canada, and the US for half a century and from 1972 onwards also in transnational ESTO festivals.It is generally maintained that the Estonian diaspora played a distinctive role in the dismantling of Soviet rule in Estonia a quarter-century ago. Consequently, we must accept that song festivals held outside of Estonia effectively kept the spirit of a free Estonia alive. It is therefore time to harmonise the Ernesaks’ excluding phenomenon pertaining to song festivals since World War II with the efforts of Estonian master conductors in Germany, Sweden, Canada, and the US. Their accomplishments far away in the Free World added significantly to the present-day song festival tradition that grows ever stronger in Estonia. It is compellingly clear that the Estonian diaspora song and ESTO festivals should be included in the Estonian paragraph of the 2003 UNESCO World Heritage List.And, if one looks around on the Song Festival Grounds in Tallinn, one easily discovers space enough for Dr Roman Toi of Toronto (b. 1916) beside the statue of Maestro Gustav Ernesaks.