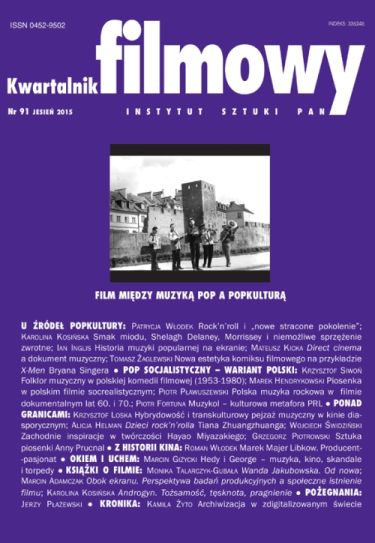 "Direct cinema" a dokument muzyczny. Wpływ kina bezpośredniego na powstanie i kształt dokumentalistyki muzycznej
Direct Cinema and a Musical Documentary. The Impact of Direct Cinema on the Rise and Shape of Music Documentaries

Summary/Abstract: The aim of the article is the analysis of the rise of music documentaries and defining the source of the film language employed by its creators. The subject of research are both traditional film documentaries, the so called rockumentaries, and film recordings of concerts and festivals. Through examining the genesis of the musical fact based cinema, the author devotes special attention to technological aspects, as well as their impact on the shape and aesthetics of the works of art belonging to this genre. The considerations revolve around classic titles created in the spirit of direct cinema, because it is direct cinema that Kicka defines as the source of the most distinctive features of contemporary music documentary.