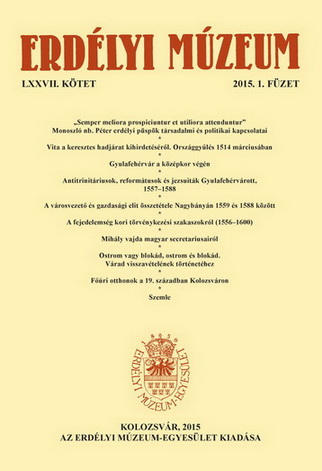 Political and Social Relationships of Peter Monoszló Bishop of Transylvania

Summary/Abstract: Bishop Peter Monoszló’s family had solid political relationships, and himself was a very skillful politician. These facts allowed him to have the status of a magnate. The Transylvanian bishop supported always the strongest candidate for the crown, knowing that a solid central government is a vital interest of his bishopric. Similarly to the other Hungarian bishops of his time, he fought persistently against king Ladislas IV, which he considered to be a pagan. He kept good relationships with Transylvanian voivodes and the local nobility, being in the same time ready to fight anytime for the rights of his bishopric. He had similar relations with his fellow bishops. To consolidate his military power he built two stone fortresses. Thanks to Peter Monoszló’s activity the fortune and prestige of the Transylvanian bishopric grew considerably. That’s why, after his death, voivode Ladislas Kán wanted at any price to have his own man as a bishop. His memory inspired the Transylvanian chapter to elect a magnate bishop decades later. We don’t have too many sources to illustrate bishop Peter’s religious feelings, but we may consider – knowing his activity – that his main interest was in keeping and enlarging his bishopric’s rights and freedoms. His priorities are very well illustrated by the arenga cited in title of an episcopal document.