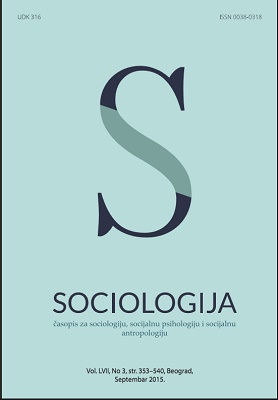 Summary/Abstract: The article presents the results of an analysis of attitudes of population in seventeenEuropean countries on the importance of components of national identity – cultural, ascriptive and civic – based on the data collected in a survey (INTUNE project). The hypothesis that modernization processes influencethe strengthening of the civic component as well as the weakening of ascriptive and cultural components is being checked. Differences in identity formation between countries with specific historical legacies (democratic tradition, dominant religious denomination, and ethnic composition) and structural characteristics (GDP per capita, level of urbanization, migration rate, and tertiary education attainment rate) is being analyzed, as well as the significance of different individual predictors (such as gender, age and university education). In addition to the confirmation of the basic hypothesis, the results suggest that the modernization effects of examined factors (economic, cultural and political) are visible only up to a certain level of development, whereupon they tend to decrease their influence. The strongest influence on the strength of civic components is recorded with an economic factor – GDP per capita. Although civic components proved to be dominant in shaping the national identities across the examined countries, the other two traits – ascriptive and cultural – do not disappear, testifying to the still existing hybrid nature of national identity.