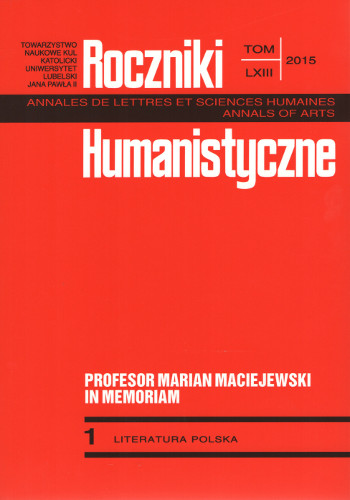 Summary/Abstract: The article attempts to compare the kerygmatic analysis as it was used by Marian Maciejewski, with the studies of the relation between religion and literature that had been used in studies of literature earlier. The school developed at the Catholic University of Lublin, to which the Professor referred, represented by scholars of such a caliber as Czesław Zgorzelski, Irena Sławińska, Maria Jasińska-Wojtkowska or Stefan Sawicki, made a very important contribution to developing a methodology of research on the sacrum in literature. Against this background Maciejewski's suggestion goes further; it not only probes into the structure of the text, in which the studied religious element is present, but tries to interpret it as confronted with the apostolic kerygma, in order to reveal its important Christian, or non-Christian features (e.g. natural religiousness). The kerygmatic analysis, called here “Maciejewski's method”, consists in diligent reflection on all the aspects of a literary work and on the anthropological conception inscribed in it, especially on the “spiritual condition” of the man who is the subject of the work.