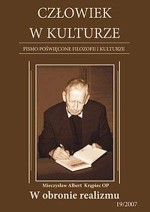 Summary/Abstract: The author analyzes the philosophical discussion on realism which was held by Thomists in order to prevent from confusions produced by those in modern history who failed to grasp a crucial difference between species as impressa or quo, and species as expressa or in quo. His reflections enable to understand that realism can conform to reality as a social construction without losing its ability to demonstrate that human mind is open for cognizing things in themselves and in part independently from social constructions. The first part of his work is dedicated to following topics: (a) specifying forms, impressed and expressed: terms without equivalence in modern philosophy; (b) the problem of thing and object; (c) specifying forms, objects, and things; and (d) the problem of actual intelligibility.