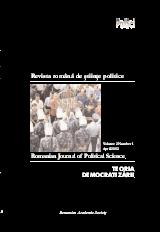 Summary/Abstract: Where does Romania stand on democracy a decade after the fall of the Communist regime? Has it become a consolidated democracy? Did democratic institutions gain the trust of the majority? Political transition is defined as the process of replacing formal institutions of Communist times with new, official and formal institutions, oriented towards free market and democracy. As this process is now largely over, Romania can be considered a consolidated democracy, but not, in every area, a substantial democracy, as the review of recent achievements and setbacks for democracy shows. Previous bad experiences with civil servants turn out as a powerful predictor of mistrust in government and state in general in models of institutional social capital. Residual communism and frustration with the transition are also causes for mistrust in politics. Anti-democratic attitudes are mainly associated with advanced age, low institutional trust, authoritarianism and lower political competence. The argument is made that better governance is the only policy tool available to build trust and consolidate the legitimacy of the political regime.