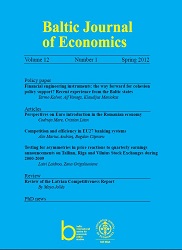 Summary/Abstract: In our study, we investigate competition in the banking systems of the EU27 as a whole, but also in both old EU member states and new EU member states, in the context of European Union integration and enlargement. Specifically, we construct 2 measures of competition, the Lerner Index and H-statistics, using bank-level data for a panel of 923 commercial banks from the 27 countries that are member states of the EU. The results show a significant increase in competition in new EU members between 2001 and 2006, while in old member states we see a notable decrease in competition between 2005 and 2007. As a whole, competition in the EU27 increases comparatively with 2001, and we consider adoption of the euro and continuing European integration to be the main factors for this issue.