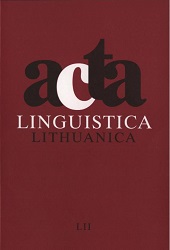 Summary/Abstract: Using Kuryłowicz’s notions of grammatical and concrete cases, grammatical cases are examined with respect to their syntactic functions and concrete ones with respect to their semantic functions. Our hypothesis is that statistically the frequency of a case is inversely proportional to its degree of functional markedness. Grammatical cases (nominative, accusative, genitive) are shown to be more frequent than concrete ones (dative, instrumental, locative). Differences in frequency of case forms for specific words reflects markedness of the case and noun semantics. The study is based on an analysis of spoken Lithuanian using the CHILDES programma. The frequency of case forms and their meanings were investigated for adult-directed speech (ADS), child-directed speech (CDS) and child speech (CS). Similar tendencies were shown to hold in CDS and CS, but different ones in ADS. Significant differences connected with animacy were observed. The results confirm the assumption that the meaning of a noun influences the semantics of individual cases and their potential of occurrence.