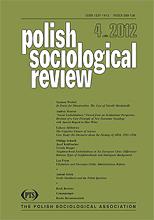 Summary/Abstract: In 1899 and 1907, Polish patriotic circles contacted well-known European and American intellectuals and politicians, asking them to express themselves on the subject of independence for Poland, which was then divided between Russia, Prussia and Austria. Emile Durkheim responded to both requests. The present article comments on these mostly unknown texts by Durkheim. The replies sent by Ferdinand T”nnies, Vilfredo Pareto and other scholars in the social sciences are also briefly discussed.