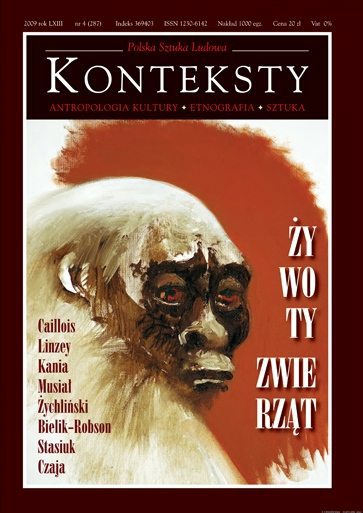 Przefarbowany świat. Mitologie polowania
A Painted World. The Mythologies of the Hunt

Summary/Abstract: In Western culture hunting has along and historical lineage and is regarded as one of the cultural practices sanctioned by age-old tradition and customs. Today, despite the fact that it has ceased being alife necessi- ty, it still remains alively fragment of that culture. The hunt has turned into an exciting form of spending le- isure time and aphenomenon situated between ahob- by, entertainment and sport. The presented text seeks an answer to questions about the mythological dimen- sion of the chase. The author carried out acritical de- construction of the universal myth of the hunt upon the basis of two instructive books: Zbigniew Kruczyń- ski’s Farba znaczy krew and Tomasz Matkowski’s Polo- waneczko. He was interested in the r e al (and not me- rely imaginary) image in contemporary culture, and thus endeavoured to recreate the mental premises at the basis of hunting and to demonstrate their consequ- ences (for Nature and man). Concluding, D. Czaja as- serted that the contemporary hunt is ’intellectual tom- foolery, acultural absurdity and an ethical scandal” and demanded its delegalisation.