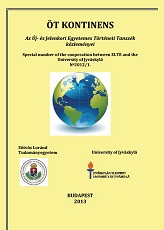 Summary/Abstract: The present article is a summary of a monography on the genesis of the Cantata profana which is one of the greatest composition of Béla Bartók. The Cantata is an answer to the crisi of the age between the two world wars. It is the most important myth of the Hungarian humanistic intellectuels. One of the greatest exegete of this myth, Károly Kerényi, has seen in his work of Bartók the most strong appeal to the spiritual and factual resistance against the world of lies and falsities. It is not by mere chance that some parts of the analysis of Kerényi were not published in Hungarian. Paradoxycally, György Lukács, the communist opponent of Kerényi translated the message of the Cantata in the same way, but he gave to it a revolutionary sense. According to him the art of Bartók was the only succesful intellectual revolution in Hungary. The events of 1956 gave a mighty affirmation of this statement, and this revolution gave the mightiest impetus to the crisis of the communism.