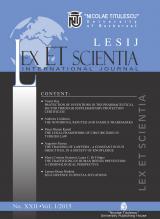 Summary/Abstract: Alternative dispute resolution (ADR) includes dispute resolution processes and techniques that act as a means for disagreeing parties to come to an agreement short of litigation. It is a collective term for the ways that parties can settle disputes, with (or without) the help of a third party.Despite historic resistance to ADR by many popular parties and their advocates, ADR has gained widespread acceptance among both the general public and the legal profession in recent years. In fact, some courts now require some parties to resort to ADR of some type, before permitting the parties' cases to be tried. The rising popularity of ADR can be explained by the increasing caseload of traditional courts, the perception that ADR imposes fewer costs than litigation, a preference for confidentiality, and the desire of some parties to have greater control over the selection of the individual or individuals who will decide their dispute.Directive 2013/11/EU of the European Parliament and of the Council on alternative dispute resolution for consumer disputes and amending Regulation (EC) No 2006/2004 and Directive 2009/22/EC (hereinafter „Directive 2013/11/EU”) aims to ensure a high level of consumer protection and the proper functioning of the internal market by ensuring that complaints against traders can be submitted by consumers on a voluntary basis, to entities of alternative disputes which are independent, impartial, transparent, effective, simple,quick and fair.Directive 2013/11/EU establishes harmonized quality requirements for entities applying alternative dispute resolution procedure (hereinafter "ADR entity") to provide the same protection and the same rights of consumers in all Member States.Besides this, the present study is trying to present broadly how are all this trasposed in the romanian legislation.