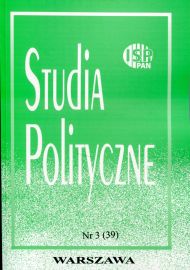 "Błąd krymski" jako efekt myślenia grupowego? Polska wobec aneksji Krymu w 2014 roku
“The Crimean Error” as a Result of Groupthink? Poland and the Annexation of the Crimea in 2014

Summary/Abstract: The ease with which Russia managed to surprise the political elites of the West with the events of early 2014 is dumbfounding. On the eve of the annexation of the Crimea, no one in the public space in Poland warned against the upcoming turn in the policies of Moscow. Representatives of the highest Polish authorities responsible for the security and foreign policy were clearly surprised with the developments. Undoubtedly, the “Crimean error” indicates that information that had been flowing from Russia for a long time was ignored as it did not fit into the policy adopted by the Polish authorities. From today's perspective, multiple signals can be indicated about the upcoming profound changes in the immediate environment of Polish security.When examining why the Polish authorities did not notice the upcoming shift in the politics of Russia, we should take into account the group thinking syndrome, described by Irving Janis. In this approach, group members try to minimize conflict and reach a consensus decision without critical evaluation of alternative viewpoints. This term has gained popularity in social psychology, but has also provided important research tools for the analysis of foreign policy, treated as a separate area in the context of international relations.