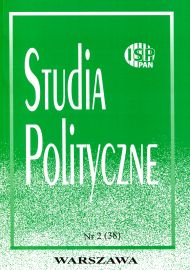 Summary/Abstract: Corruption exists everywhere, though its scale and manifestations are diverse. It is regularly reviewed by the UN, the EU, the World Bank, governments, political parties, sociologists, political scientists and lawyers.This text focuses on political corruption analysed through the prism of social consciousness and materials gathered by Polish and foreign institutions. In Poland, special attention should be paid to data collected by the Supreme Chamber of Control, Transparency International and the Stefan Batory Foundation.The extent and nature of corruption (especially in institutions and the government) have been largely affected by political and social transformations. Although Poland is in the middle of the international corruption statistics (and the rates are decreasing), political corruption is still widespread. An example is the dysfunction of the supervisory boards of state-owned enterprises that represent a “transitive” economic base for governing political parties. The social dimension of this phenomenon is the overflow of damage caused by the deterioration of the state, the devaluation of the law and professional ethics, and the bending of the democratic rules according to the individual and collective interests of ruling parties.