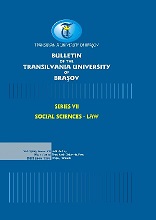 Summary/Abstract: This article aims to make a foray into the matter of corruption offenses, based on the differentiation elements between these offenses as they were regulated in the previous laws and in the new Penal Code. Corruption offenses, stated in the first chapter of the fifth title were elaborated considering the regulation of these facts in the previous Penal Code and the regulations of Law no 78/2000 for the prevention, discovery and sanctioning of corruption facts; also, the fact of aligning our national law with that of other European states such as the German Penal Code, the Finish Penal Code, the Swedish Penal Code, was considered. Corruption is one of the most serious threats for the state of law in contemporary society, undermining institutions and democratic values.