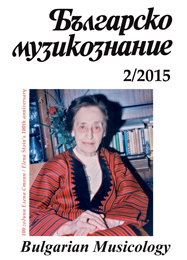 Summary/Abstract: During the 15th century musical mentality in Europe has prepared for important and decisive changes. Frequently mentioned instrumental music in sources and documents in that time, and its explicit appearance is an important part of those changes. Another crucial moment of those changes is the lute, which gradually moves from monodic to polyphonic practice. Therefore, lute not only gain an important role in every aspect of the musical life in Europe, but became its symbol. In the end of the 15th and beginning of the 16th century the earliest lute sources recently known has appeared. They present the new, polyphonic function of the instrument and include compositions with new denotations, which not descend directly from the polyphonic choral tradition: prelude (praeambulum), recercar, fantasia. Those terms has appeared in different times and different instrumental sources during the period between the mid-15th and early 16th centuries. Their common connotation, generally speaking, is directed to the free, improvisational playing the music. The article in presence observes the appearance and spreading of the free forms in the lute music during the 16th century. Some important changes in the content of those terms as early as first decades of the century are stressed. While the prints of 1507–1508, published by the Venetian editor Petrucci contain idiomatic instrumental forms, related to the spontaneous improvising style, the next generations demonstrate a reinforced interest in adaptation of the contrapuntal techniques in their compositions. Thus the free forms became a place for development of compositional approaches and technical possibilities of the lute as well. The main purpose of this article is not to present a new discoveries rather to introduce to the chosen topic.