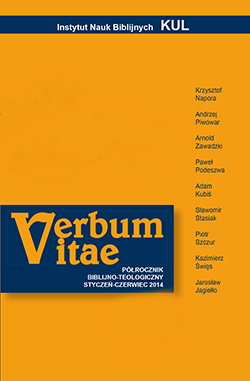 Summary/Abstract: The present article deals with the studies of testimony in the Gospel of Luke, focusing on the testimony of the disciples of Jesus. In the introduction the author outlines the theme of testimony in the double work of Luke-Acts as compared to other New Testament writings, and explains the meaning of giving testimony and being a witness according to the Third Evangelist. The exegetical study of texts, describing the missionary activity of the disciples in Luke shows that they were acting as witnesses in several stages. In the first stage the Twelve are witnesses sent by Jesus to proclaim the kingdom of God in Galilee. The second stage is the testimony of the seventy-two disciples sent on a mission to proclaim the kingdom of God in Samaria and Galilee. The radicalism of the requirements resembles the radicalism of Jesus’ life, and yields the special character of the disciples’ testimony. The object and the quality of the disciples’ testimony are changed after the Easter events. The disciples have to reckon with persecution, which turned into an opportunity to give testimony inspired by the Holy Spirit. The missionary commandment given by the Risen Lord, being simultaneously a testimony commandment, is preceded by the empowerment of the disciples with supernatural gifts from the Risen Lord, and conditioned by acceptance of the Holy Spirit. The object of disciples’ testimony after Easter will be the passion, the death, and above all the resurrection of Christ based on the prophecies of the Old Testament, and conversion with forgiveness of sins in His name. The testimony of the apostolic community of disciples would be taken from Palestine to all nations on Earth.