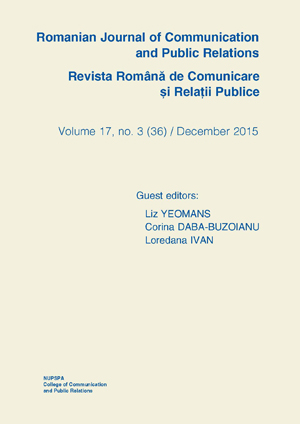 Summary/Abstract: A space generally associated with marketers and breaking news (Hobsbawn, 2009 cited in Evans, Twomey & Talan, 2011), Twitter has also become a space debate, community building and legitimization for companies and social movements alike. The academic literature has seen a rise in interest in the micro-blogging platform. For instance, Adi and Moloney (2012) assess the strategic uses of Twitter by protest groups, Adi, Erickson and Lilleker (2014) reflect on the networks and use pattern of the same platform by politicians, namely UK Labor party representatives in the House of Lords while Adi and Grigore (2015) analyze the strategic uses of social media by corporations. Bajpai and Jaiswal (2011) on the other hand propose a framework for analyzing collective action events on Twitter and so do the creators behind visual analysis platforms like NodeXL, Gephi, Linkurious and Socioviz. Public Relations research too has provided several reflections and analyses of Twitter. Verhoeven et al (2012) and Sweetsner and Kelleher discuss how practitioners use social media; Lovejoy, Waters and Saxton evaluate how NGO are engaging stakeholders though the new medium, while Saffer, Sommerfeldt and Taylor (2013) suggest that Twitter interactivity influences the quality of organization–public relationships. With questions about the professionalization of Public Relations as well as about the portrayals and perceptions of the profession continuing to intrigue researchers, it is surprising that only Xifra and Grau (2010) looked into the type of information shared in tweets about public relations. Using the Twitter data collection and analysis option from Socioviz this paper provides an exploratory account of the #publicrelations on Twitter. Using the visualizations provided by the platform and automated data analysis to gain insight into over 10,000 tweets published during June 15-24 and July 15-24, this paper qualitatively assesses the emerging themes about public relations focusing on association of hashtags and type of messages shared and identifies the most active and most influential users within the issue topic. The paper reveals that the #publicrelations is often associated with #jobs or is hijacked and associated with tags such as #gossip or #entertainment. The paper also shows that conversation in the #publicrelations issue network is limited and that the hashtag only partially includes content relevant to the practice. In doing so the paper raises important questions about the nature of dialogue and symmetry on social media and their assessment and suggests that further research should explore twitter chats as well as continue to apply similar data collection methods as used for the study.