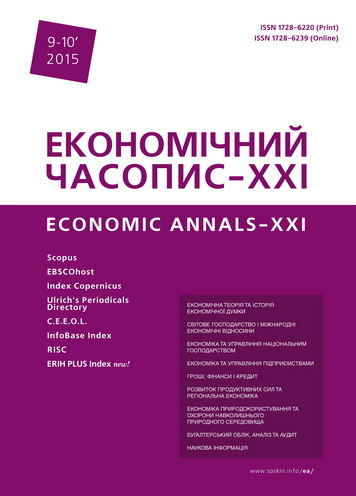 Summary/Abstract: This research is dedicated to identifying of misbalances on the agrarian market of Ukraine in the areas of grain, vegetable, fruits and berries, meat, milk and egg production. The analysis of their demand and supply dependence during the 2007–2014 period was conducted by means of coefficients of correlation, limit effectiveness and elasticity. It is determined that volumes of production are more sensitive to consumption levels. The worst misbalances are related to meat, fruits and berries, where production does not cover even the limited solvency of the Ukrainian population. Consumption has the greatest impact on vegetable production in crops-growing and meat production in animal-breeding. The stimulation of production development by the price factor is considered by types of agricultural holdings. According to calculations, the increase of wages in agriculture caused the growth of grain and meat production. Growing incomes allowed the population to substitute the consumption of bread with a more useful consumption of vegetables, fruits and berries. However, the consumption levels for fruits and berries, meat and milk in Ukraine do not correspond to the international nutrition standards. It has been found out that the consumer price index demonstrates the strongest correlation with egg consumption, whereas the worst situation is observed regarding the demand for milk. The obtained results are the basis for further development of the mechanisms for addressing imbalances in various branches of the Ukrainian agriculture.