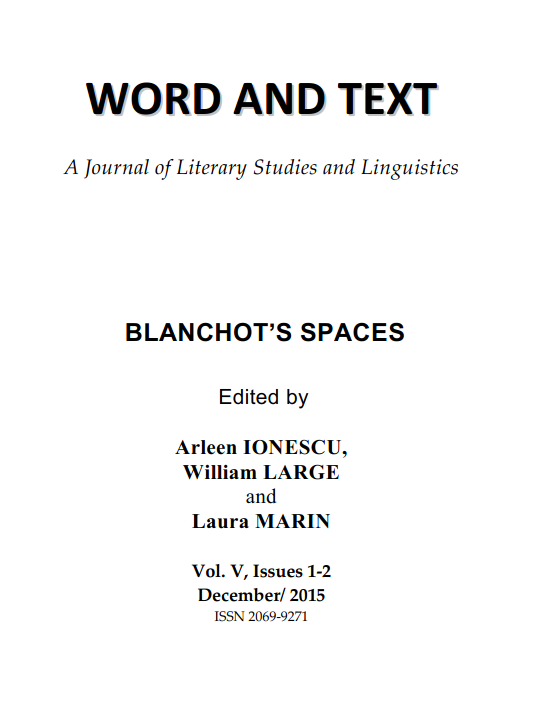 (with a Little Help from Maurice Blanchot)

Summary/Abstract: My argument takes as its premise the idea that western theatre, what we might call, in shorthand, Aristotelian theatre, invests in a theological notion of time, which I associate, on the one hand, with a causal, linear narrative (beginning, middle, end), and, on the other, with a viewing experience which produces an absorptive temporality, rooted in a kind of weightlessness, a mode of temporal transcendence, an exiting from the earth. By taking us out of time, by abstracting us from our bodies, the dramatic logic of western theatre, invests in a time of redemption, in which the temporality of artificial/staged events is perceived as being somehow more real than time itself. Against synchronous identification and the time of drama, the article argues that Samuel Beckett’s Waiting for Godot, purposively produces an experience of ‘presentness’, in which the subject – the spectator – is compelled to undergo an alternative temporality – the time of waiting. This is immanent time, the time of a different theatrical event, the time in which, to cite Beckett’s Endgame, ‘something takes its course’. ‘Presentness,’ as I define it here, has nothing in common with what the art critic Michael Fried sees as a moment of grace, and neither does it refer to an act of metaphysical self-coincidence. Rather, it is best seen as an ambivalent, impossible mode of temporality which I term ‘sacred time’. Crucially, this is not the time of cycles and myths; more disconcertingly, as in the sense of the English adverb presently, this is a time that is never quite here, a time of deferral, suspension and dis-appointment. The time, then, that I am interested in designating as sacred or as presentness has much in common with Maurice Blanchot’s notion of time as disaster or catastrophe; it is time that never arrives primarily, and scandalously, because it is always already here, weighing on us, insisting on its absent but irreducible gravity. It is a time that roots us to the earth.

Journal: Word and Text, A Journal of Literary Studies and Linguistics