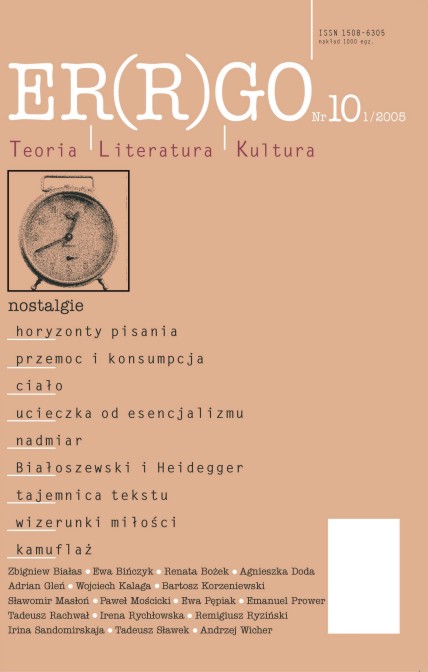 Summary/Abstract: What one may consider as the most significant contribution of Martin Heidegger to the paradigm of modern thought is the anxiety that prompted the ontological analysis in Sein und Zeit and then found its full expression in the philosopher's later writings. This anxiety can be defined as the necessity of formulating the appropriate philosophical apparatus suitable for the task that had been neglected in the European metaphysical tradition: the asking of the question of Being. The article is an attempt at delineating a parallel between Heidegger's ontological question and Białoszewski's poetical writings. Focusing on the question of Being as an opening, as an invitation extended towards the thinking subject, the argument presents Białoszewski's poetry as an illustration of what Heidegger names the call of Being, the gift of revelation of Being to Dasein and the possibilities of its acceptance. The author argues that a certain reception Białoszewski's poetry allows its reader to experience the revelation of Being more directly, thus bringing, at least partially, Heideggerian theoretical dimension into the epistemological, pragmatic experience.