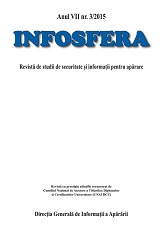 Summary/Abstract: The concept of war remains, in its essence, unchanged: a violent expression of the politics, a direct way to unblock an international complex situation, an immediate and categorical way to impose somebody´s will into a confrontation. Nowadays, the most violent confl icts have spread, taking new forms. Without any doubt, we can say that we are dealing with a permanent war. In this context, the historical moment which marked the outstanding development of information technology was the preparation and the deployment of „Desert Storm” military operation, against Iraqi army and regime, in 1991. This precise moment was the base of so-called „informational warfare-IW”, which was implemented under military actions.