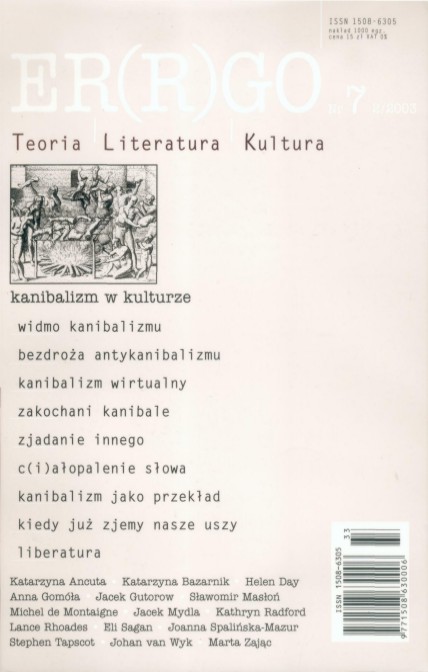 Summary/Abstract: The starting point of these reflections is the concept of the „metaphysics of meat", (developed in an essay by Jolanta Brach-Czaina). Metaphysics of meat draws attention to a certain law of man's existence, which says once you eat, you are also eaten, and thus defines life as "the cannibals' feast": the process of exchange when body is flesh as much as meat. One can assume then the affinity between eating and other forms of relating ourselves to others, like the act of love and the act of speech (verbal exchange), the affinity whose visible sign is the mouth with its double function of production and consumption. The article points to the traps of individualism, which excludes one from the processes of exchange and, literally or metaphorically, makes one keep one's mouth shut. In meatology, (the form of logos whose ground is the metaphysics of meat) the words we utter are treated only as food for other words, their value is purely nutritional. The literary examples for the, failed or successful, acts of consumption as an expression of love range from the Marquis de Sade to Lewis Carroll and Patrick Süskind.