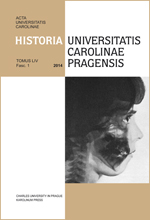 Summary/Abstract: Karl Valentin Müller (1896–1963), an amateur researcher, published his first papers on the synthesis of ‘social’ and ‘racial’ issues in the tradition of German Sozialanthropologie around 1930. A decade later, the former member of the German Social Democratic Party had already become a prominent expert on Nazi population policy and Umvolkung. In 1941 he was appointed professor at the newly established Institute of Social Anthropology and Volk Biology (Institut für Sozialanthropologie und Volksbiologie) at the Faculty of Philosophy of the German University in Prague. His professional advancement was strongly supported by high SD and SS officials. In Prague he presented his programme of Umvolkung, or ethnic re-engineering, which was based on the idea of reorganising the national composition of the population in Central and South Eastern Europe. The programme was grounded in Müller’s own theories of Umvolkung with special focus on Bohemia and Moravia. After the Second World War, he became head of the Institute for Research on Intellectual Giftedness (Institut für Begabtenforschung) in Hannover. Later, Müller was appointed professor of empirical sociology at the University of Economic and Social Sciences in Nuremberg and became an active representative of Sozialanthropologie in the early Federal Republic of Germany. Müller never abandoned his basic assumptions, which were rooted in his convictions regarding heredity and racial biology and supported by an eclectic methodological mix. He had never been a creative or innovative scientist but he exerted significant influence on the field of applied policy in three German political systems – the Weimar Republic, the ‘Third Reich’, and post-war Western Germany.