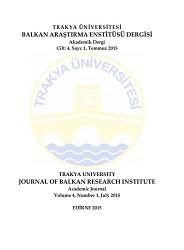 Summary/Abstract: Tan, is a newspaper published in Turkish language by Tan Printing Company in Pristina. From 1969-1999, for thirty years, uninterruptedly published newspaper reaches 1.536 editions. It was financed by government budget. Publishing language is Istanbul Turkish. The newspaper was published due to informing Turkish population in Kosovo. It aims passing of material and moral elements to the next generation. Having the identity of a publishing house in its foundation, the newspaper also issues various magazines and books. Thus it prepares the foundation of Contemporary Turkish literature of Kosovo. Our objective in this work is studying Tan newspaper in respect to its form, content and writers’ staff.