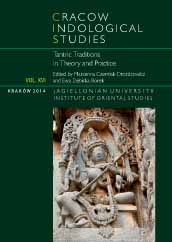 Summary/Abstract: Rather than studying various manifestations of the “divine feminine” in Hindu tantric texts, this paper proposes to examine the ritual role of women in the earliest (seventh to ninth centuries CE) scriptural sources that teach the cult of goddesses and other divine females (yoginīs). Women have three main ritual roles in these sources, which often overlap: they may be (1) consorts in sexual rites (dūtī/śakti), (2) witch-like semi-divine yoginīs, who transmit the doctrine and help practitioners to obtain supernatural powers, and (3) female practitioners (sādhakī/bhaginī), who are initiated in the same way as male ones. Concerning the last category, it is shown that women had the right to receive full initiation according to early śākta scriptures (which was not the case according to mainstream śaiva Tantras) and were able to practice the same rites for the same purposes as men.