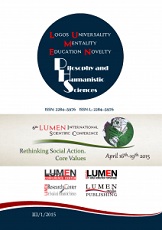 Summary/Abstract: This paper aims to examine in terms of axiological some of the most important principles of Islamic religious and political thought. Thus, understanding the relationship between politics, religion and morality plays a fundamental role. For the understanding of the Islamic political life must be correlated with ideas such as: morality, fairness and equity, piety. Thus, the political life and the religious phenomenon are interconnected making a unitary modality of relating to reality. For Islam among politics, religion and ethics there is an indestructible bond. The Islamic moral based on Koran and in our age, the moral reflection is anchored more to the concreteness, reason for which it is transformed into militant ideology.