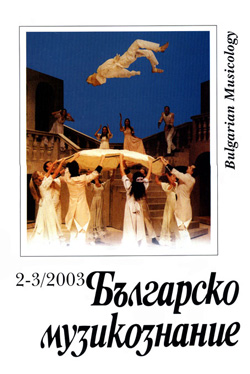 Summary/Abstract: The paper traces the way of the professional ballet education in this country. At first in the private ballet schools of Pesho Radoev, Anastas Petrov, Zhivko Biserov, Feo Mustakova the experience of each instructor (at the same time practicing ballet actor) was decisive for the choice of the teaching system. Later after the official opening of the State Ballet School in 1951, the Russian Pedagogical System of Agripina Vaganova was adopted. In 1956 a second department was opened and the school was re-named State Choreographic School with two departments “Classical Dances” and “Bulgarian Dances”. At first the pedagogues in the newly opened school were actors with long experience without special pedagogical education. The relations with similar dance schools in Moscow, Saint Petersburg, Berlin, Leipzig, Budapest, Bucharest, Dresden developed in several stages - specialization of pedagogues and graduates, which later be­ came education in Ballet Stage Production and Ballet Pedagogy - mainly in Moscow and Saint Petersburg. While in Bulgaria there is no specialized higher education in Ballet Pedagogy and Ballet Stage Production, the State Choreo­ graphic School is the only place in the country, which not only educates ballet performers, but also creates aesthetics and models of behaviour, sets the trends in the development of our future ballet pedagogues, choreographers, ballet experts. In the 90s higher education in Ballet Pedagogy and Ballet Stage Produc­ tion started in this country and gradually our contacts with Russia became less intensive. Nowadays all teachers have higher pedagogical education received in music academies in Plovdiv and Sofia or in the academies in Russia. The dance education in this country follows its own ways of development, whereas with the years the need for opening a third department “Modem Dance” that will prepare performers for musicals and modern dance formations is being increasingly felt.