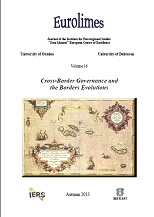 Summary/Abstract: The questions in Central Europe relating to the role of country borders (separating vs. integrating) have always been in the centre of academic attention. After the fall of communist regimes (1989-1991) the countries of the region joined the European Union one by one and, as a result, border zone relations have increased both in numbers and in intensity. The Croatian-Hungarian border has a history of over 900 years. This long historical period can be divided into six phases. This paper focuses on the main events and the characteristic features of the last two (5th and 6th) periods in the history of the Croatian-Hungarian border. The 5th period began in 1945 with the foundation of the second Yugoslav State and it came to an end in 1991 with the dissolution of the country. Although, in the second part of this period (from the 1960s onward) some border zone relations were already detectable in the area, still, the border zones of the time can be described as “merely coexisting” areas. In the first part of our paper the main features of this period are introduced. The 6th period of the history of the Croatian-Hungarian border began in 1991, with the dissolution of the second Yugoslav State, and it lasts until recently. The second part of our paper explores the characteristics of this period by analysing those European projects of the time, which were aimed at enhancing Croatian-Hungarian cooperation. In the third part of our paper the problems of the emergence of the Mura Region EGTC are investigated.